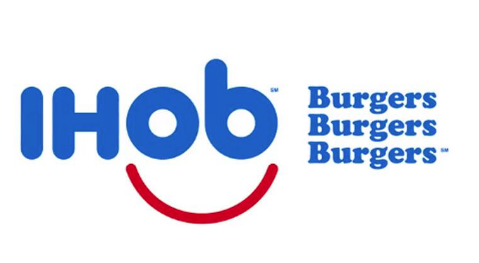 The International House of Pancakes announced that they will change their name and business model for the next few weeks. Instead of going with what has made them famous, they are decided to abandon that, and focus on burgers, and become IHob. IHOP claims that this change is a short-term marketing move to promote their burger line, but rival breakfast chains see this as a form of weakness.

Head of marketing for Denny’s shared that this move “clearly makes IHOP look like it’s lost confidence in its pancakes. People seeking a true and unblemished breakfast experience have to look elsewhere now.”

IHOP claims that focusing on their burger line will keep people coming back to the restaurant, for multiple meals. “If we feed people enough pancakes, they won’t have the energy to leave. By the time lunch rolls around, we stick a new menu in front of them, and they think they’re being productive,” explained IHOP chief strategist Barry Cranderson.

This hasn’t stopped competitors’ attempts to lure the vital and often sought after breakfast clientele, that are known to be lavish and liberal with their ordering. Waffle House understands this market perfectly, and has already responded, by adding pancakes to their name. “We are proud to announce we will now be known as Waffle and Pancake House,” exclaimed Waffle House CEO Frederick Maple.

“We feel that it’s important to stand behind your product, even if that product is something that you could easily make at home, with better quality. Anyone could. Even if you’ve never cooked before. Maybe IHOP has something up its sleeve with this burger thing.”

It’s unclear how customers and IHOP loyalists will feel by the change in direction. Latest reports indicate that most IHOP customers will not notice, and will continue with their lives. The news has struck a chord with burger-chain Wendy’s, who responded with a tweet saying, “you should have changed the B to bitches, because that’s how we will treat you from now on.” The International House of Burgers (for the moment), has yet to respond.